Like Kwebbelkop, he appears in some vlogs made by some of the Sidemen members. Due to him residing in a foreign country, he only catches up with them at European gaming events such as Insomnia. He lives in Spain, along with his girlfriend Sanna (with the channel of iAmSanna). 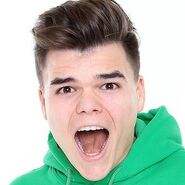 Retrieved from "https://theultimatesidemen.fandom.com/wiki/Jelly?oldid=36717"
Community content is available under CC-BY-SA unless otherwise noted.